Morgan’s 9-10 year old Braves team were  the 2nd -half winners in their league.   Friday night they began playing the 1st- half winners, Yankees, for the Championship title.  They only got to the bottom of the 2nd inning when the teams had to hit the dugouts due to heavy rain and lightning.  The game was delayed for about an hour and twenty minutes while we huddled under umbrellas  awaiting for the game to be called off.  The weather forecast showed heavy storms rolling our way so we knew it would continue all night.  Friday was the only possible time to play for the Championship as the All Stars would be playing games the next week and many players were leaving for vacation on Saturday. 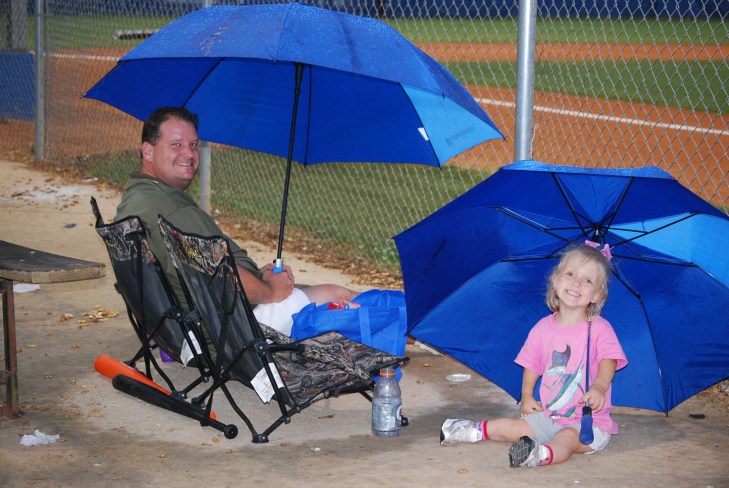 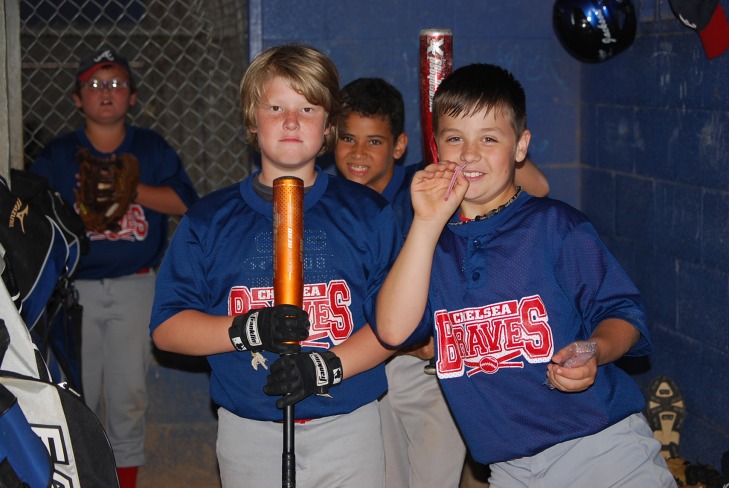 Just waiting it out

Jordan and Joseph stayed dry in another dugout

The rain died down and the teams took the field again.  The Braves were in the field, Morgan stopped several balls from getting to the outfield.  He made an excellent throw from third base to first throwing out the runner!!!  The rain soon returned heavier and with even more lightning!!! Back to the dugouts the boys ran and once again we waited in a rain delay.  After a group meeting with the parents and coaches of both teams a decision was finally made to call the game and declare both teams Co-Champions.  The Yankees trophies would say 1st half Champs and the Braves trophies would say 2nd half Champs!!! 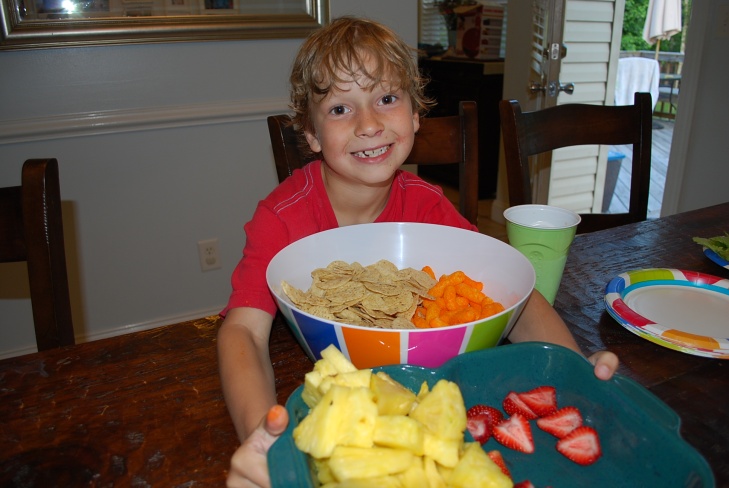 Joseph had already eaten half the strawberries

Today was the kids last day of school so we had an end of school cookout party for them.  We had fresh strawberries, pineapple, chips, cookies, sodas, home grilled hamburgers and banana pudding!!!  They were surprised by a new Slip-n-side and Nerf bat and ball too!!  Our home really attracts lots of kids so we had a virtual waterpark in our yard with the neighborhood children.  Trey had just as much fun playing baseball in the front yard as all the kids did!  Our kiddos were so appreciative for the celebration which made it all more enjoyable. They worked really hard this school year so I’m glad we can throw them this party to celebrate!!! 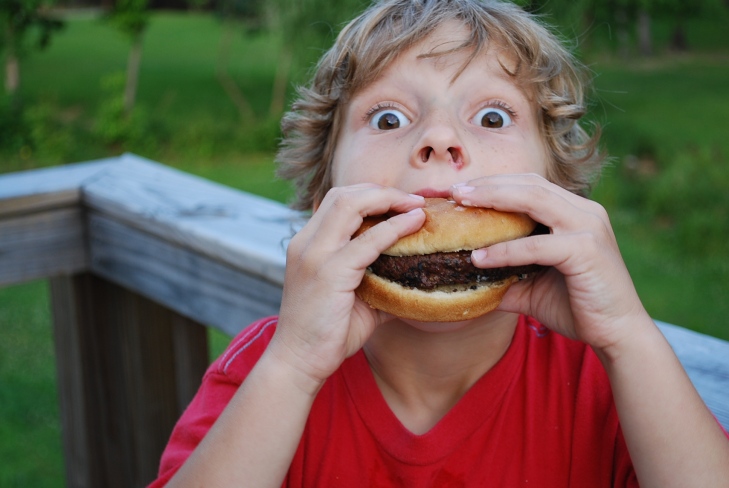 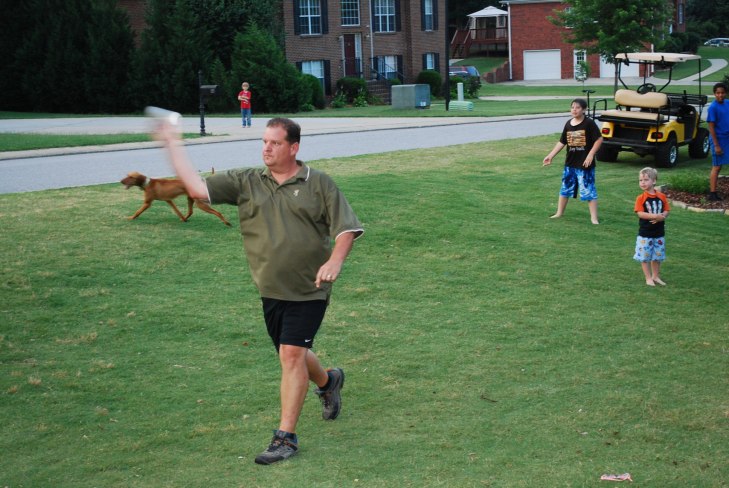 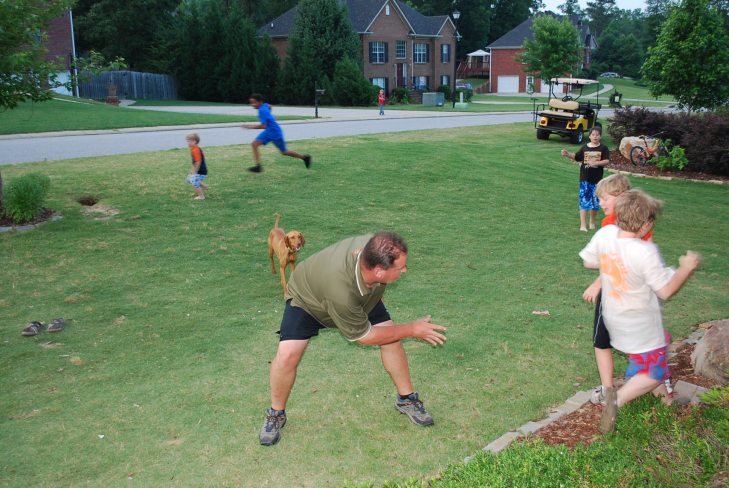 Morgan and Trey still "Discussing" the outcome of this play

I just love little boys in Super Hero costumes.  Here Joseph and Jordan are once again in the many costumes they would wear throughout a day.  Joseph was REALLY REALLY into Spiderman at this time!!!

Joseph showing Jordan how to shoot a web

Showing us the “upside down Spiderman kiss” pose

Yet another day with my little Super Heroes

These 2 are such good buddies and remind me of how Elijah and Morgan would dress up in their Hero cloths too.  Some days I would not know who or what Morgan was as many times he would wear multiple costumes and make up a new character.  It was always best to just ask him who he was that morning so that I wouldn’t offend him and call him the wrong name!  Every now and then I would run errands to the grocery store with my Super Heroes in tow and the older brothers would cry ‘fowl’ and say they were embarrassing them.  I would remind Elijah and Morgan that they too did the exact thing and I let them go all over town in costume, capes, magic boots and all so I was going to do the same thing with Joseph and Jordan. They grow up all too fast and Mommy wanted to let their creativity and imagination run as high as it could go.

And off they go to fight crime and defend their Mommy!! 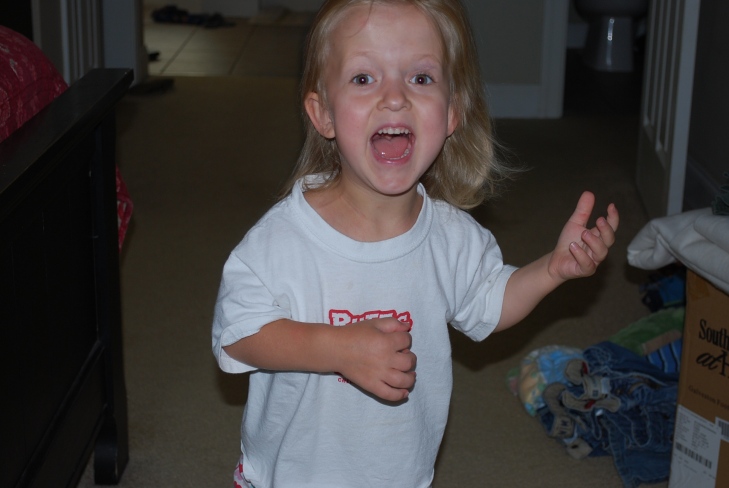 Something stirs within you that you just can’t resist

So you get a little funky playing your Air Guitar!!!!

We have found The Wild Thing!!

It was a great season for Elijah and the Cubs 11-12 year olds.  Tonight was the first play-off game for us.  We went into a double-header holding 2nd place but fatigue took over and we couldn’t come back from behind. The boys never came down on one another nor did they give up.   This team has been through so much this season but has shown great character time and time again.  We are so proud of the young men these boys are growing to be!

This morning we went to Morgan’s Awards ceremony in his class room.  He was so excited!! Trey and Morgan had a deal that if he got all A’s the whole year then he would get $50.oo!!  Morgan was a little nervous these last few weeks of school due to a couple of low scores on some test.  He thought he might be getting all A’s and one B.  I felt so bad for him because he really has put in a lot of effort and I wanted him to get all A’s as much as he did.  So off to the Awards presentation we went not knowing if he’d get A-Honors  or A/B-Honors.  When we walked into the room Morgan spotted us and gave Trey a subtle hint by rubbing his thumb and fingers in the air and mouthing, “Fifty Bucks” with a grin from ear to ear!!!  He did it, ALL A’s for our boy Morgan!!! 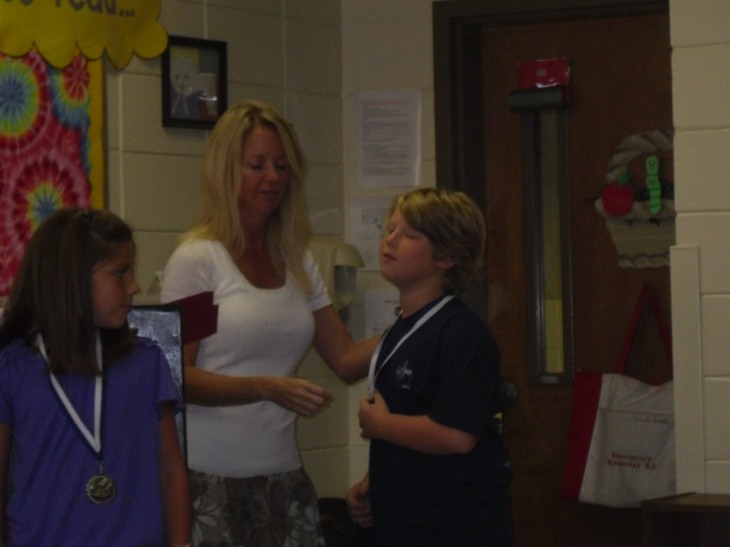 Checking out the engraving

One happy All A's boy!

Jordan so happy for Morgan

His class voted him "Funniest" student 🙂 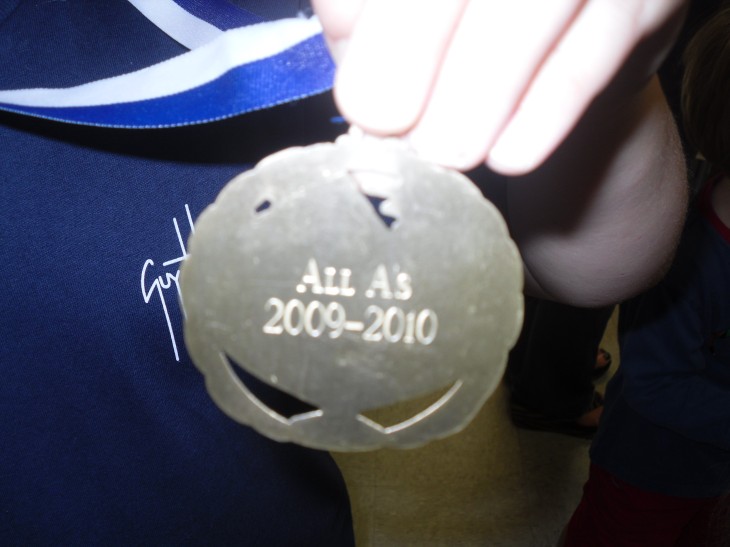 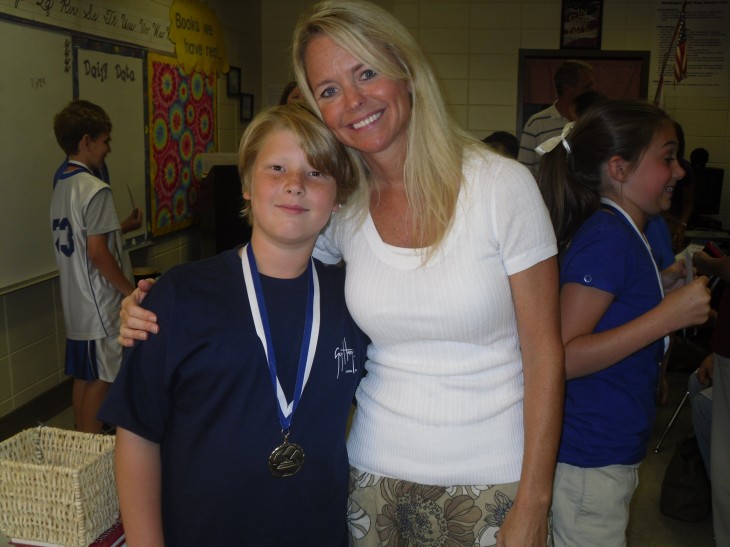 Such a sweet teacher, Mrs. Smith

With all of our business of running off to baseball, soccer, tennis, my work, Trey’s traveling and kids school we decided to let them skip school on Good Friday so that we could have one big family fun day before Daddy had to fly off to Japan on Easter morning.  The kids have been begging to go bowling so that was the BIG surprise thing we did. We also headed over to Mark’s Outdoors, Books-a-million and Chick-filet for a late lunch.  They had a blast bowling!!  We paid for 2 games each but we soon found out it took quite some time for 6 to 7 people to play an entire game.  We finally stopped when we were half way through the second round as children started dropping out of their turn to bowl and everyone was getting hungry too. 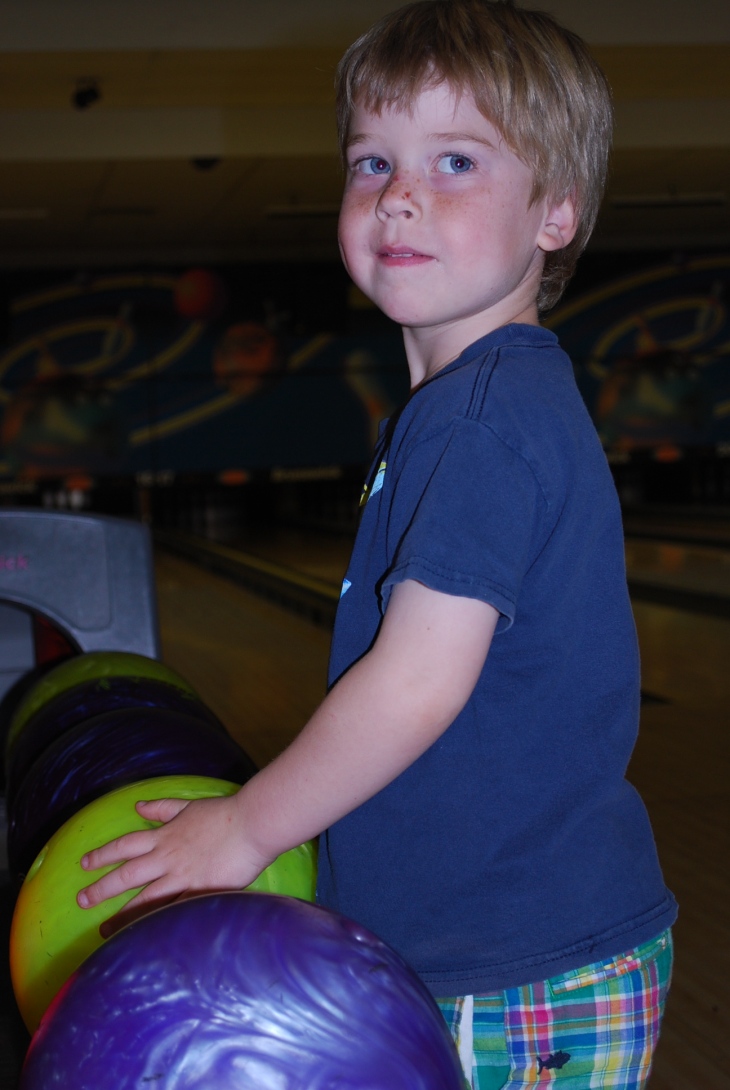 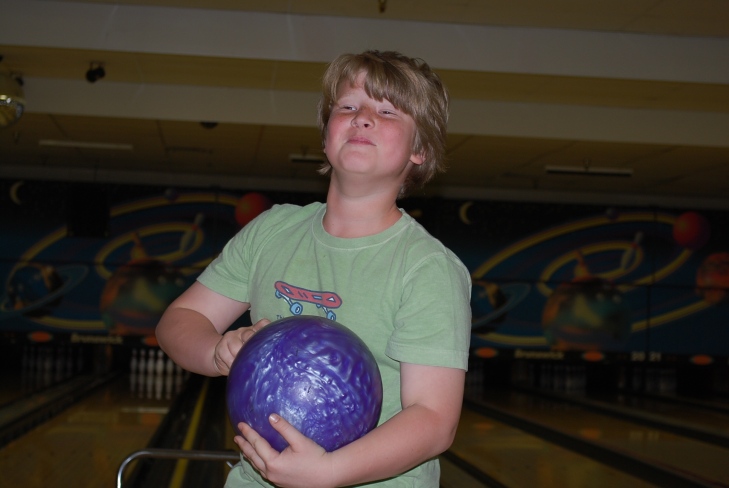 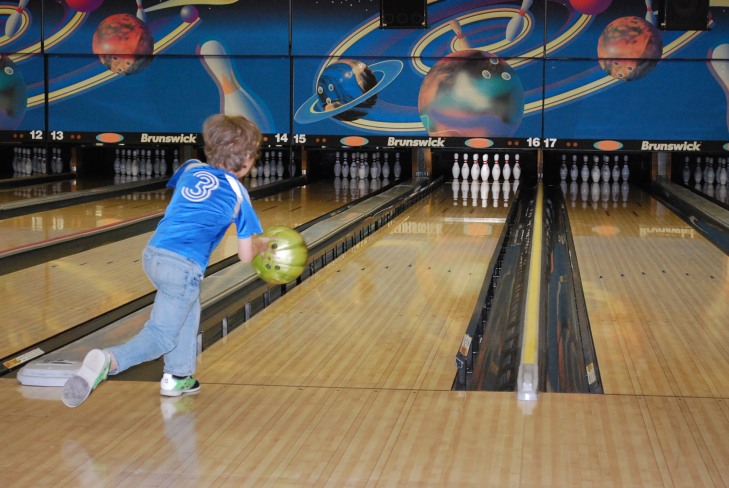 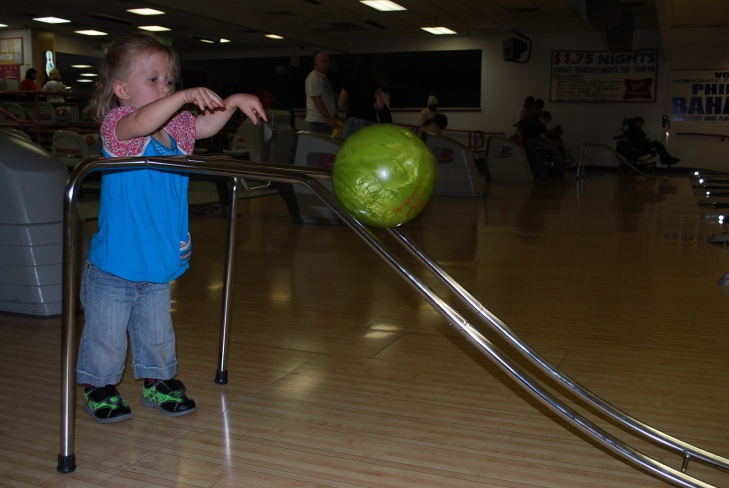 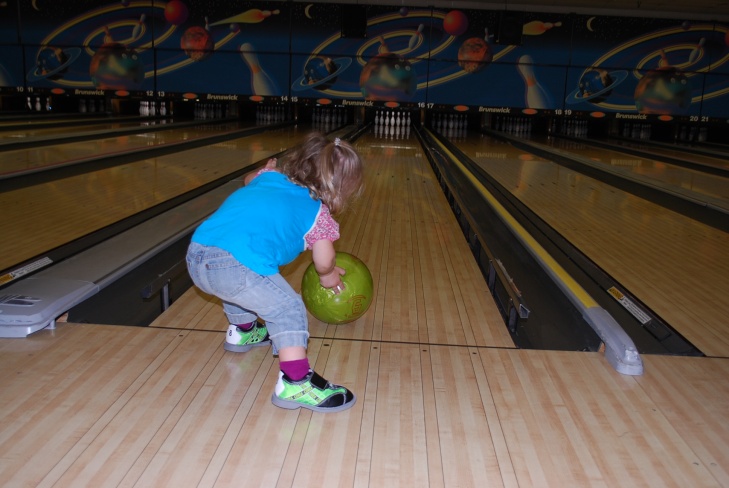 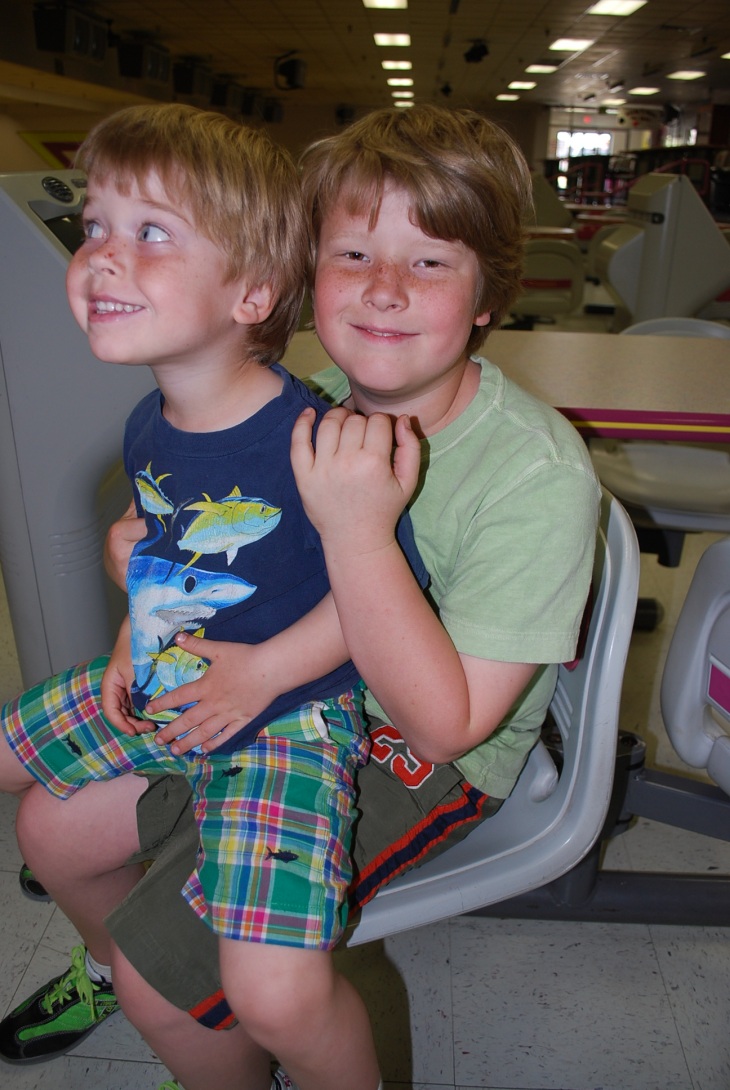 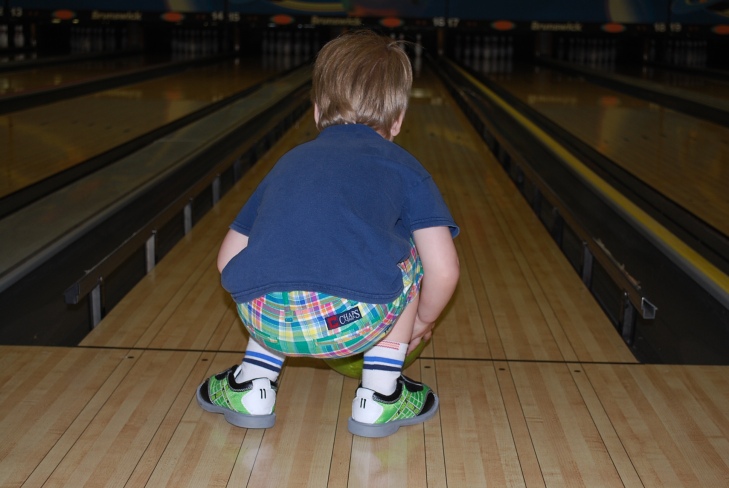 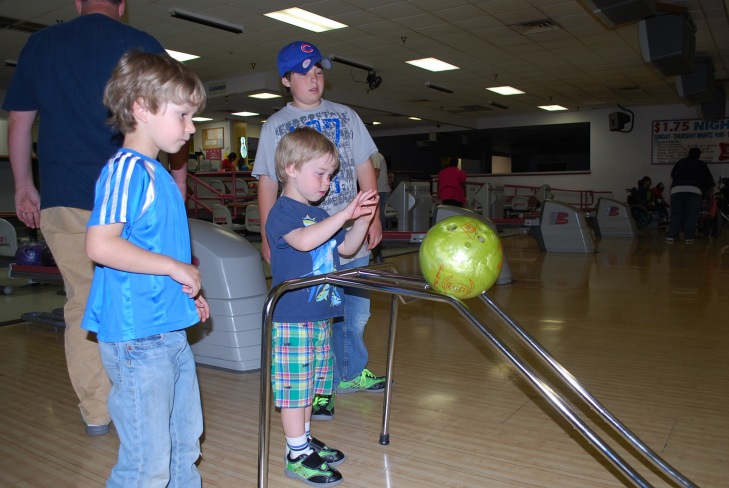 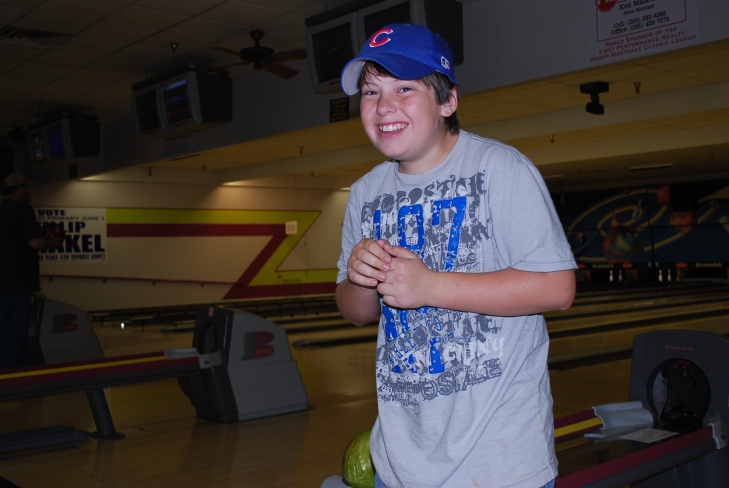 I have no idea what they’re doing here but they sure are happy!

Thank you Daddy for a fantastic Family Fun Day!!!  We love you!!!!

Gotcha caught in the act of being tender.

If I had a living biological daughter I wonder if she would look a little like this?  Would she have my blue eyes or would Trey’s dominate brown prevail? Would she have freckles and fair hair or brown and olive skin?

Jordan decided to put on Mary’s dress and run out to the living room to SHOCK his Daddy and boy/girl did it work!!! 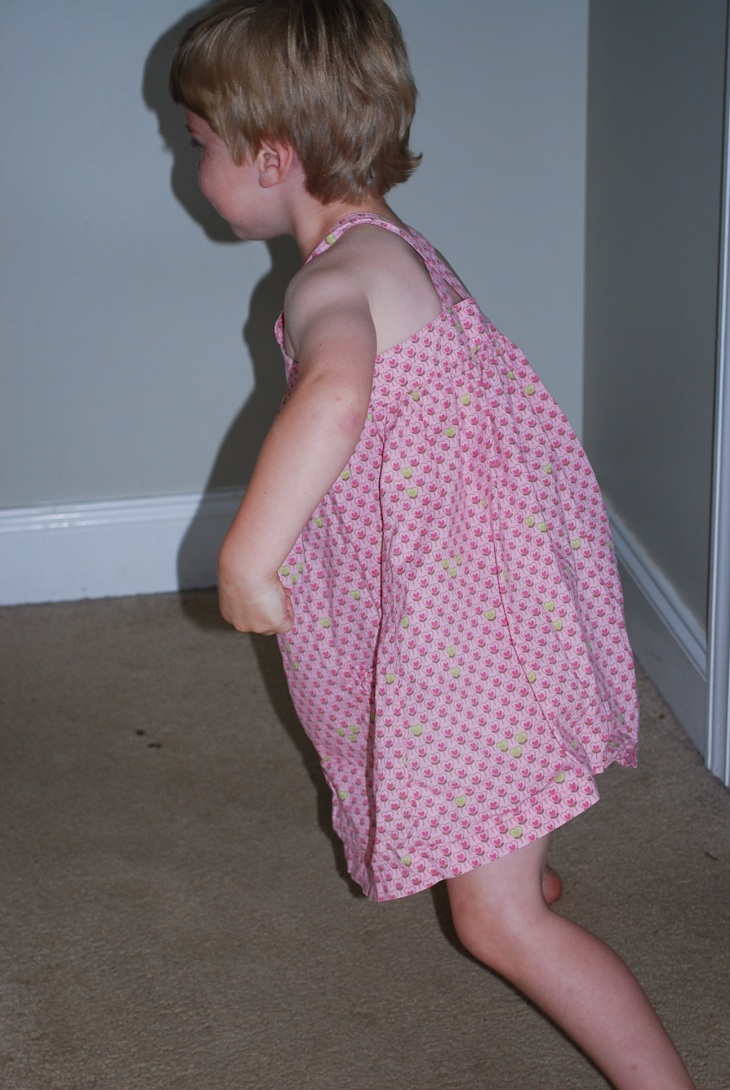 After a few squills and screams of delight, big brothers laughing, Mary saying “Umm Jordan is that my dress!” and Jordan ever so pleased with his prank,  he ran away to undress the dress.

Somewhere along the way he decided his dress wearing days were over and pleaded as you see in this shot, “NO no no don’t put me on the internet!!!!”.

Oh sweety this is too good NOT to go on Mommy’s Blog!!!  I’ll pay for your therapy later.

You know it’s been a while since your last worthy home cooked meal when upon placing the four-hour cooked roast, mashed potatoes, gravy, broccoli, cantaloupe and tea onto the table and your child request, “Take a picture, take a picture this looks soooo goood!!!”.   It’s not Thanksgiving or Christmas dinner nor is it a special occasion meal when we usually do indeed take a picture of the family with all the glorious fixings laid out before us, it’s just Thursday night and we don’t have any baseball practices or games to go to!!!!  This time of year we are constantly running out the door to either one of them and at times eating in shifts.  I guess Jordan felt like it was a special occasion that we were all sitting down together eating a well prepared meal. He was quite persistent for me to get up and go get my camera before we ate!!! 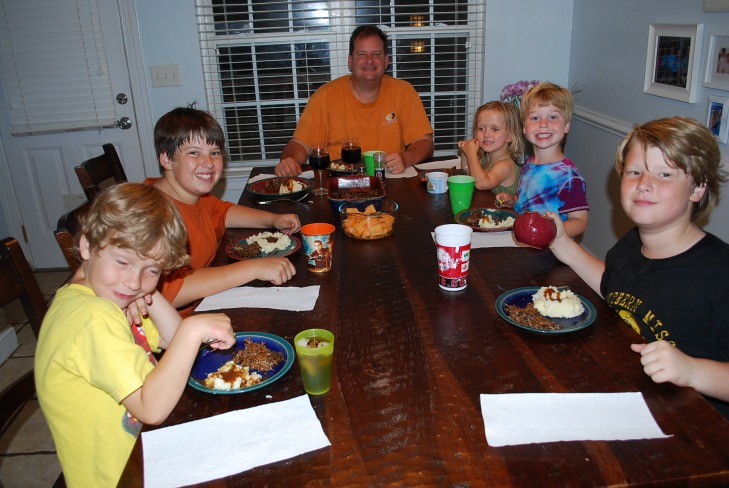 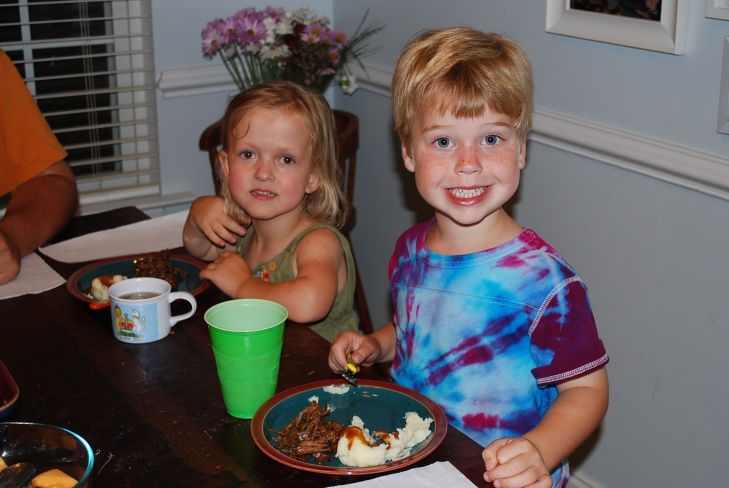 Thank you Jordan for reminding us how important home cooked sit down meals are to this family!